I’ve literally had a week from hell! I haven’t even had the time to make myself a decent breakfast, I’ve been chucking everything into a blender and hoping for the best all week. To be quite honest I think I deserve a doughnut, a Tonka bean doughnut to be precise.

Last week I had the absolute honour of making the great trek to Tonka Bean Bakery. In my opinion that doughnut was worth every mile I travelled for it. Shakil Khan is the owner and mastermind behind Tonka Bean bakery, this man is one of the most experienced and talented  chefs that has ever come out of South Africa. His business ethics are incomparable, I have never met a man with so much love and passion for his business. Tonka bean bakery is more than just his income, it’s his family and his pride. Like most successful chefs, he was influenced by his mother ,who inspired him to become who he is today. Shakil began his culinary journey in Durban, at the Christina Martin culinary arts centre. He then trained with one of the most influential chefs that South Africa has seen, IN his restaurant. Shakil didn’t stop there though, he took a leap of faith and joined the San Francisco Baking academy, and I suppose this is how the creative genius was born.

I’ve heard people comparing his doughnuts to some “famous” machine made doughnuts out there. That’s really not a fair comparison, considering that these doughnuts are artisan master pieces. I was lucky enough to witness the preparation of these doughnuts in person. Each and every ingredient that is put into these pastries is fresh and of the highest quality. Here’s something we lack these days, QUALITY, some people have forgotten what this means. It’s not all about the money for him, which is why his creations are so blooming good.

We tried the famous Tonka Bean Doughnut, (by the way the bakery gets its name from the exotic species of vanilla bean they use). The doughnut itself was a delight, it was soft and fluffy and filled to the brim with crème patt that was out of this world! All tossed in a healthy dose of sugar, what more could you ask for? It’s simple and yet so satisfying, I can tell why it’s the celebrity of the bakery. We were lucky enough to sample one of Shakil’s newest creations, the Nutella crème doughnut. There were so many different notes of chocolatey goodness packed into that doughnut, it was certainly worth the calories.

These doughnuts are undeniably good; they are one of the major reasons that Tonka is so successful. However in my opinion , those Kouign Amaan’s were the true star of the show. Yes, I loved the fluff of the doughnut, but do you know how damn satisfying it is to pull apart a crisp, flakey, buttery pastry that’s coated in layers of caramelised sugar? You really won’t understand until you get some! Whatever this is, it’s the first of its kind in SA that I have tasted, and I hope it stays. I like to think of it as the sophisticated cousin of the croissant. The queen of the bakery is what I call it.

Even though Tonka isn’t set up for the commercial coffee shop  vibe, they can definitely boast their great coffee! The best possible way to get your hands on the pastries, is to call in your order in advance! Shakil only prepares limited quantities every day, so consider yourself lucky if you get some.

Over all, I had the sweetest morning of my life. My family and I could not get enough of these doughnuts, and no it was certainly not a fad, we woke up early the following Saturday morning to make it in time for the delivery at the Caltex in Oakland’s. If you can’t make the drive, make sure to visit Hanover bakery, father coffee or the Caltex in Oakland’s Johannesburg to get your hands on some of these divine pastries! And if you’re from Pretoria, then you’re at an advantage, as Tonka isn’t too far from you guys!

I have the best job in the world, I get the opportunity to meet people like Shakil and his beautiful wife Nazeema, that are so inspiring and kind. I am so fortunate to have witnessed the behind the scenes at Tonka Bean bakery. I truly appreciate Shakils outlook on business and life, as well as his unmatched talent. Thanks for having us over guys!

On that note, guess who’s getting doughnuts tomorrow! (me) 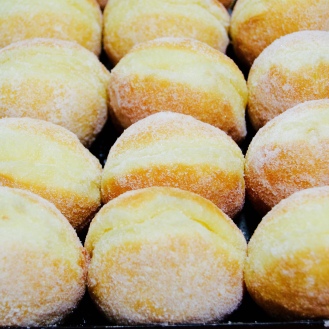